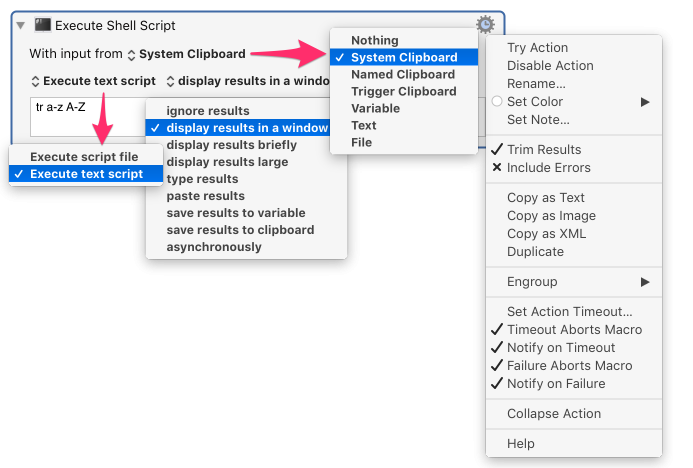 In your script, use this format: $KMVAR_[variable_name]

where [variable_name] is the name of your Keyboard Maestro Variable, but with spaces in the name replaced with underscores (‗).

For example: File Name would be formatted as $KMVAR‗File‗Name.

Accessing Keyboard Maestro Variables in Python is somewhat different. Here is an example:

For a KM Macro that shows this, see:
MACRO: Using KM Variables with Bash awk [Example]

For more info, see these discussions in the Keyboard Maestro Forum:

Now a further complication happens when you want to sent a string containing double quotes and variables to a parameter. For example, perhaps you want a command like this:

that is the script will search for tools in the /usr/bin directory, then in the /bin directory, then /usr/sbin and finally /sbin. Only tools installed by the system will be in these directories - any tools you have installed will almost certainly be elsewhere and so not found by default because:

How To Set a Path

A shell script path that will work for many users is:

Of course, if you have tools or files you installed elsewhere, then you would need to include the path to those in this path statement, IF you plan to use any of those tools/files in a Execute Shell Script Action.

You can create the ENV_PATH Variable one time using the Variable Preferences Pane of the Keyboard Maestro Preferences. 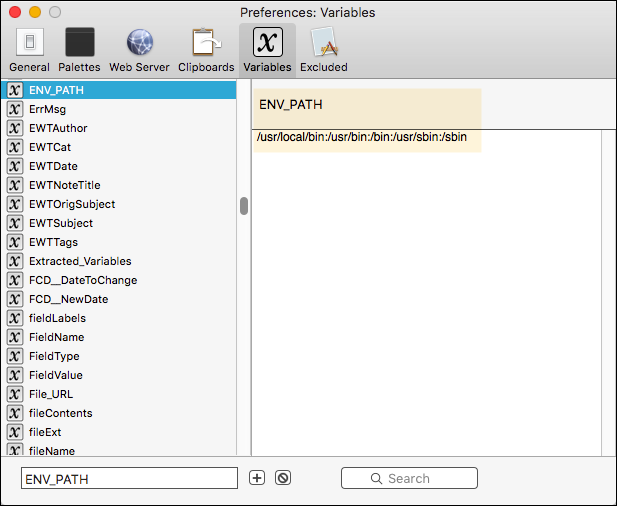 For a good discussion about this see:

When you execute a shell script from other apps, like Terminal.app, the shell does NOT have access to the Keyboard Maestro Engine environment, and thus it does NOT know anything about Keyboard Maestro Variables.

⚠️ Note that you do NOT need to replace spaces with underscores in your Variable name in this case, since you are ultimately using AppleScript in the Shell Script.

Here is a simple example that works with Keyboard Maestro Ver 6+ to get a variable:

If you are using Keyboard Maestro 7.1+ you can use the new simpler command to get a variable:

To set a variable (and create if needed) with Ver 7.1+ you can use this: