Keyboard Maestro supports calculations in almost any numeric text fields. For example you can Pause for “60*Time in Minutes”. Calculations can also use comma separated lists of numbers as arrays, and can return such arrays, so you can operate on rectangle frames and points. Numeric fields often start small with up/down step arrows, but if you type anything other than a number they will expand to allow a more complex expression to be entered. You can tell that a field accepts calculations because a small C shows in the field while editing it. 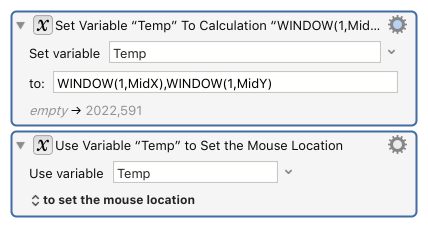 will result in the mouse being placed at the center of the front window.

Note: You must use commas for this purpose, and full stops (.) for decimal numbers, and never use any thousands separators, regardless of your desired language.

Keyboard Maestro’s expressions include precedence, nested bracketed expressions, many built-in functions, various numeric bases, so you should be able to write almost any expressions you might like to use, as well as use it as a general purpose calculator if desired.

Operators based on precedence from lowest to highest are:

Variables can be used if they contain numeric expressions, including an array of numbers separated by commas, in which case you can use an array index to select the desired number.

You can use either = or == for testing for equality.

Operators and functions must be in uppercase to minimize conflict with variables.

The available functions are listed on the wiki Functions page.

The index is itself an expression, so it can be arbitrarily complex.

In a Calculation field you can reference the numbers in a Keyboard Maestro Variable (which is always a string) using dot notation:

However in a text field, since any text is allowed, you must use percent encoded tokens to indicate where more processing is required. You can include a variable in the text by using the %Variable% token, or you can use a calculation by using the %Calculate% token, or any number of other Tokens. 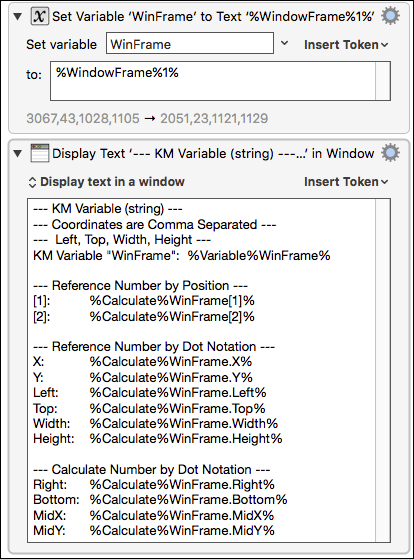 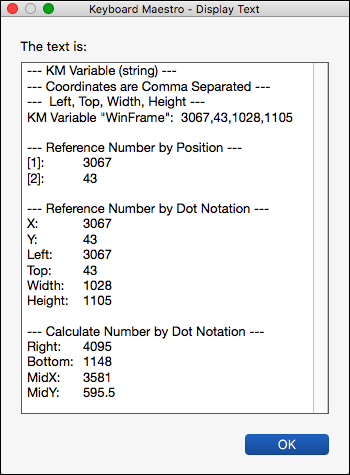 Some example expressions are: