Like most programming languages, Keyboard Maestro allows you to create Variables to store data for use later on in the same Macro, or in other Macros.

Variables can be set from many actions. You can set variables to specific tokenised text, to the result of a calculations, from user input, from the Keychain, by searching other variables, from the clipboard or Named Clipboards, as the result of scripts, and from many other sources.

Anywhere an Action requires a Variable, you can enter any name you like (even though often a default name is provided), as long as it conforms to these rules:

Global Variables are permanently stored on your Mac drive (like a file), and are available for read/write in any Macro or Action, not just the Macro where the Variable was created. These variables persist between logins and restarts of your Mac.

Variables with names that start or end with “Password” or “PW” are considered passwords – their values will not be stored (except in memory) and they cannot be read directly by shell scripts or AppleScripts, though their consequences can easily be extracted, eg with the Set Clipboard to Text action, so you should clear them as soon as they have served their purpose. The Prompt For User Input dialog will display such variables concealed in a password field.

Variables with names that start with “Instance” (case insensitive, trailing space not necessary) are considered private to a specific execution sequence. Each time the macro is run, they will start empty but their value can be seen and changed by other macros within the same execution sequence (for example, if you execute a macro using the Execute Macro action, that macro can see and change the instance variable (unless you execute it asynchronously which would create a new instance)). Since two instances of a macro can be running at the same time, this is useful to ensure they each have their own version of the variable.

Since Local and Instance variables are transient, they are not shown in the Variables preferences pane.

Variables with names that start with “Local” (case insensitive, trailing space not necessary) are considered local to a specific execution of a specific macro. Each time the macro is run, they will start empty and no other macro will see or be able to change values.

Note that Local and Instance Variables are available in scripts only when the script is called in an Execute Script action, unless you specify the execution instance explicitly.

Variables are usually created and set by Macro Actions, but can also be set by scripts. The Action that sets a variable will create it if need be. Variables do not need to be declared in any way.

The most direction Action to set a variable is the Set Variable to Text action.

This action processes the tokens and backslashed characters in the text and sets the variable. As will all text fields, if you wish to use another variable in the text you must use the %Variable% token, eg The value is %Variable%VarName%.

You can also use the Set Variable to Calculation action. This action evaluates the numeric expression and then sets the variable to the result. As with all numeric fields, if you wish to use another variable in the calculation, you use the variable unadorned, eg VarName * 3.

There are many other actions that set variables.

There are many Macro Actions that can use variables. Some of these explicitly provide for entry of the variable name, but most provide for a more general text entry that accepts either token text or a numeric expression.

When editing a field:

You can also use a short form of just %Variable Name% to include variables as long as the variable exists and has a value and there is no corresponding text token, although generally it is better and clearer to use the longer form %Variable%Variable Name%.

While technically all Variables are just strings, you can access a variable as if it were an array by setting the Variable to a delimited list of text, and then using the following notation:

How to Use Custom Array Delimiter

Place the custom delimiter after the closing bracket ]. 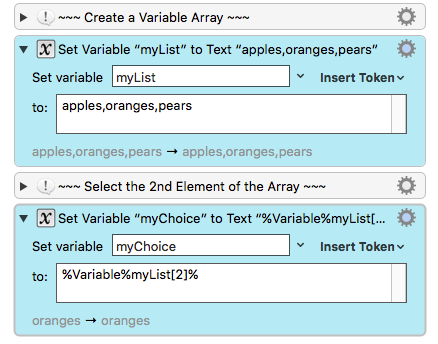 Example of Variable Array Using a Variable for the Index 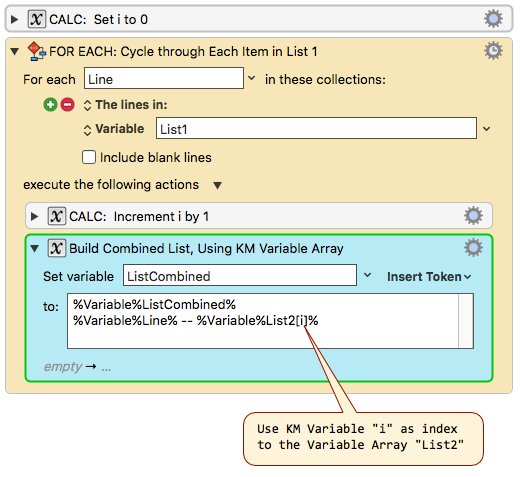 You can also access variables in a token field numerically using the %Calculate% token. It is important to note that calculations can contain only numeric values. When you use the %Calculate% token to reference a variable or variable array element, it will convert the element to a number.

In a Calculation field you can reference the numbers in a variable which contains a coordinate or rectangle (which is always a string, eg “100,100,200,200”) using dot notation:

You can get and set Keyboard Maestro Variables (Global, Local, and Instance) in these types of scripts:

And you can generally access Keyboard Maestro variables anywhere else via AppleScript from whatever language you want to use.

It may be a good idea to set a Variable to "" if you no longer need it, or if it contains sensitive information (like a password) or a large value (like a file or web page contents).

Perhaps the best way to avoid variable clutter and eliminate sensitive and/or large values is to use either Local or Instance Variables when you do not need the Variable after completion of the Macro in which the Variable is used.

Fields that expect just a variable show a small V in the field while editing it, and you can use Type Completion to complete variable names in such fields.

You can add, delete, see or change global variables in the Variables preference pane that have been created by your macros and scripts.

Local and Instance Variables are not accessible from either the Preferences Window.

You can use the Value Inspector to watch the value of a global variable.