Prompt For User Input allows you to design a form that will ask for user input, storing the results in Keyboard Maestro Variables.

You can prompt for variables with text, checkbox, popup menu, or password fields. 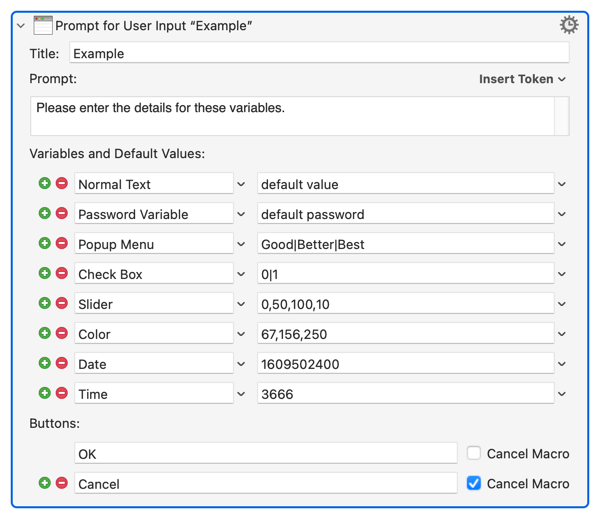 This action produces this Display: 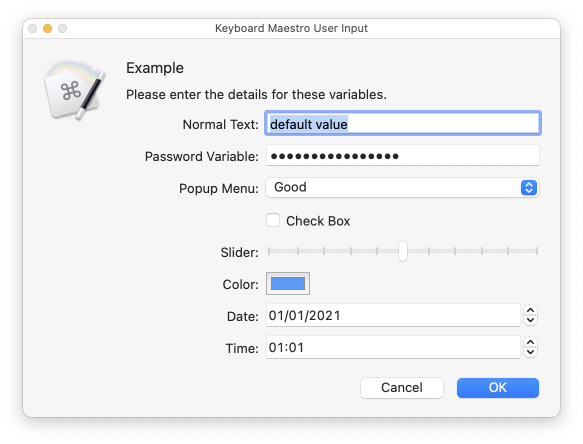 The Form Title is plain text, provided to communicate the basic purpose, or the name of the macro, to the user. It may contain any of the Keyboard Maestro Tokens. It is for display only, and cannot be changed by the user when the form is displayed.

The Prompt is plain text, provided to provide instructions or data to the user. It may contain any of the Keyboard Maestro Tokens. It is for display only, and cannot be changed by the user when the form is displayed.

The Form may contain zero or more Variable lines, with each line providing two form fields:

Using the menu selection to the right of the default value (v10.0+), you can specify the type of the field:

Automatic type will guess the type based on the value of the default field - if it contains “|” bar separated fields, then it will be a menu, or a checkbox if all the values are 0 or 1, and if the variable is a Password variable (starts or ends with “Password” or “PW”), then a password field will be used.

The field will be displayed as a single line text input field.

The field will be displayed as a single line password input field, displayed with bullets instead of characters.

The field will be displayed as a popup menu.

The default value defines the choices, separated by a bar “|”, like: “Good|Better|Best”.

The first value in the list of choices will be selected in the menu by default. For example, if you would like “Better” to be the default Popup value, then use “Better|Good|Better|Best”.

If the menu item is a dash “-”, a menu separator will be used in its place. For example, “Good|Better|Best|-|Terrible”.

If a menu items is separated in to two parts with two underscores (_), then the first part is used as the result, while the second part is displayed in the menu. For example, “B__Good|F__Fail|C__OK|B__Good|A__Excellent”.

The default field is a token text field, so you can include variable options in your list, for example: “%Variable%First Choice%|%Variable%Second Choice%”. If you want to provide a list in a variable, then you do so by starting the field with a bar (“|”), followed by your list (or your default value and then your list) in a variable (which contains choices separated by |), for example “|%Variable%Current Choice%|%Variable%Choice List%”. Without the leading bar, the entry is separated by bar first, and then token expansion is applied to each field, so that fields may contain bars, for example, “This|That|%Variable%One Entry%”.

The field will be displayed as a slider.

The result stored in the variable will be the value of the slider.

The field will be displayed as a color well.

The default value defines the color with three or four comma-separated values, being the red, green, blue and optional alpha values. All values have a range of 0 to 255.

The field will be displayed as a date, date & time, time, or time with seconds field.

The default value is unixtime for the date and time. For time-only values, you can use either a unixtime or a time in seconds in the day (so 28,800 would be 8am) - either way the result will be in the same day as the specified default value.

It can be a good idea to have a common prefix in all of the variables used by the same macro. This clearly identifies the macro that uses these variables, and groups them together in the Variables section of the Keyboard Maestro Preferences. But you may not want to expose this prefix to the user running the macro.

Similarly, you can use Instance or Local variables, and the “Instance” or “Local” will be removed from the variable name when displayed in the form.

By default, the Prompt for User Input Action comes with two buttons:

You can add more buttons to allow for other options. For example, “Save” and “Save and Send”.

You can optionally assign a shortcut key by applying a suffix to the Button Name in the form of /«character», which will cause the Button to respond to a keystroke of ⌘«character» (or just «character» if there are no focusable text fields).

How Buttons are Processed

“Normal behaviour” here is defined as doing what the user just asked to do.

A consequence of all of this is that if you have a second button in the Prompt For User Input action, and it does not cancel the macro, then you should definitely give it some other key, or disable it with “/-”.